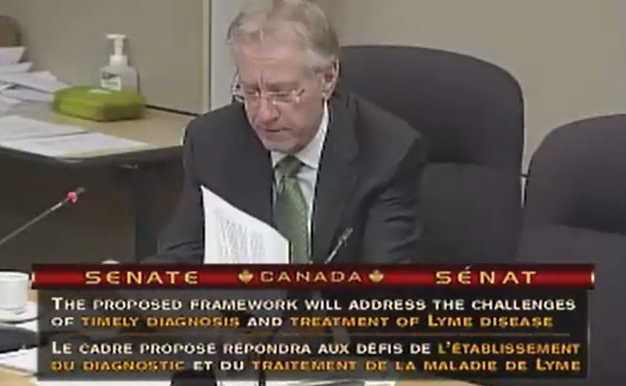 Emotions became heated, at times, during a Senate committee hearing, held last week in Canada, to review proposed legislation that would create a national strategy for Lyme disease. Bill C-442, An Act Respecting a Federal Framework on Lyme Disease, has passed the House of Commons and is now before the Senate.

While many of the points addressed in the Bill have been agreed upon by all stakeholders at the meeting, certain wording within the bill has created concern for infectious disease specialists, who argue that it suggests support for ‘pseudo-science’ treatment guidelines, while dismissing current evidence-based guidelines put forth by the Infectious Disease Society of America (IDSA). In essence, they argue that those who support the bill, support the International Lyme and Associated Diseases Society (ILADS) guidelines over IDSA guidelines.

Dr. William Bowie, an infectious disease specialist, who represented the Association of Medical Microbiology and Infectious Disease Canada (AMMI) at the meeting, recently told CBC Radio, “It’s [ILADS guidelines] one of the most egregious anti-science and pseudo-science pieces of legislation I’ve ever seen.”

“The data that Lyme advocates put forward has no proven clinical relevance,” he told CBC Radio.

The AMMI Canada is also concerned the bill supports the idea that there are significant numbers of Canadians suffering from ‘chronic’ Lyme disease, who are being ignored by the medical community. And, that the current diagnostic guidelines, developed by IDSA, are too restrictive and miss large numbers of Lyme disease cases.

Several Senators and the bill’s sponsor Green Party Leader Elizabeth May disagreed with that interpretation. The overall goal of Bill C-442, is to bring all the experts to the table, including medical professionals, researchers, legislators and advocates, she explained. “I’m not a doctor, I’m a parliamentarian.”

May pointed out that the bill is based on scientific evidence and the Public Health Agency of Canada, Health Canada, the Canadian Medical Association and the College of Physicians and Surgeons of Canada have all expressed support for the bill.

“[Lyme disease] is a rapidly spreading disease. … For doctors, Lyme disease presents a real challenge,” she stated. Laboratory tests are inaccurate, yet physicians in Canada are relying on those tests in making a diagnosis, even when a patient presents with objective symptoms. Most physicians, she said, still believe that in order to have Lyme disease, a patient must present with the classic bulls-eye rash.

After sharing his family’s personal struggles with the disease, Jim Wilson, president and founder of the Canadian Lyme Disease Foundation summarized his hopes in passing of Bill C-442.

“We want a combined global scientific perspective … borreliosis is a serious global problem … Bill C-442 begins to allow the patient and their expert to have equal input into the development of best practices that determine their life outcomes. This is long overdue and we cannot go backward.”

May read a statement from the President of the Canadian Medical Association. “The diagnosis of Lyme disease can be difficult because signs and symptoms can be non-specific and found in other conditions. If Lyme disease is not recognized during the early stages, patients may suffer from a serious debilitating disease that may be more difficult to treat.”

Dr. Bowie, however, did not express the same level of concern or urgency towards a disease that has reached epidemic levels in the United States. “Infectious disease clinicians see relatively few of these individuals [Lyme disease patients], mainly because they’re adequately managed in the community.”

“Your suggesting that a lot of people believe they have Lyme disease, but rarely do?” asked Senator Art Eggleton. “What’s going on here?”

“There’s a difference of opinion,” answered Dr. Bowie. “[between the] people who believe they have Lyme, and we don’t. So, what’s the issue?”

“Many of these people have chronic fatigue syndrome … which at least 5% of the Canadian population at any time have.”

Dr. Bowie addressed concerns over wording within the bill surrounding the diagnosis and treatment guidelines for Lyme disease. “We [infectious disease physicians] strongly disagree with the preamble suggesting the current [IDSA] guidelines are restrictive and abandon sick people with treatable illness.”

“This is based on the premise that the most common guidelines in place, developed by the Infectious Disease Society of America (IDSA) are faulty. And that there are better guidelines out there, presumably meaning the guidelines developed by Lyme advocates and so-called Lyme-literate physicians.”

“The International Lyme and Associated Diseases Society (ILADS) guidelines were reviewed by the UK Health Protection Agency and were felt to be so flawed,” he emphasized, “in almost all its aspects that the guidelines were rejected.”

I would like to point out, that there have been limitations identified in the 2000 and 2006 IDSA guidelines, as well. Two studies have found the IDSA guidelines short on evidence for a range of infections, not just Lyme disease. There are concerns with both ILADS and IDSA guidelines.

The 2014 ILADS guidelines address many of these concerns, except for the definition of chronic Lyme disease. This was not addressed in the document, because the focus was on treatment.

ILADS developed its set of guidelines because the infectious disease guidelines fall short of meeting the needs for diagnosis and treatment of individuals with chronic Lyme disease. IDSA guidelines fail to take into account the compelling, peer-reviewed, published evidence confirming persistent, recurrent and refractory Lyme disease and, in fact, deny its existence.

Because of the complexity and variability of Lyme disease symptoms, ILADS guidelines are flexible. Treatment depends upon the severity of each case, the patient’s response to therapy and the physician’s own clinical judgment.

In concluding the meeting, Dr. Bowie pleaded with the committee to remove the preamble, stating “it is not going to disappear from the literature. It’s going to be circulating and it will have a number of implications.”

“It’s an incredibly damning statement against science [IDSA] and support for pseudo science [ILADS] … I think it’s going to contribute to further difficulties … managing people with Lyme … it’s going to have negative impacts on the manage of people in Canada,” he insisted.

“I really disagree with you. I know … that many medical practitioners in Nova Scotia until recently denied that Lyme disease even existed,” Senator Kelvin Ogilvie replied forcefully.

“So, I think the issue … is not how your personal view of society is going to look at the preamble [referencing guidelines] but the guts of the bill, which will give us a national look at a disease that is recognized.”

Senator Jane Cordy addressed concerns over lab tests for the disease.  “Many of my constituents are saying the testing is not good and are travelling to the United States to pay for testing. But, when they come back to Canada, physicians aren’t recognizing those test results,” she stated. “These people are begging for help.”

Senator Eggleton agreed. “There’s obviously a problem in diagnosing this and getting treatment at an early stage.”

“Or alternatively,” Dr. Bowie argued, “people are being diagnosed and managed as having chronic Lyme, do not have Lyme and are being subjected to a false diagnosis and long courses of antimicrobials that pose a risk to them and the families around them.”

“The vast majority [of Lyme disease patients] have so-called positive test results from for-profit laboratories that use non-standardized methods and that give test results that are discrepant compared to standard methods,” he explained.

“The for-profit laboratories have their own internal methodology … they have steadfastly refused to participate in any of the standard evaluations that would be done to … any diagnostic test we use,” he continued.

Actually, Dr. Bowie’s statement is inaccurate. Tests that are marketed to other labs require FDA approval. All diagnostic tests do not require FDA approval. In fact, there are a tremendous amount of diagnostic tests used for common diseases that are not FDA approved. Even commercial laboratories, such as Quest Diagnostics, provide certain tests that aren’t FDA-approved. Instead, federal law requires that specialty labs, which Dr. Bowie is referring to, undergo a rigorous validation process established by the Centers for Medicare and Medicaid Services (CMS) and Clinical Laboratory Improvement Amendments (CLIA).

The United States medical community has wrestled with this disease at every level – ensuring dissemination of accurate educational and prevention information, tracking of both the tick population and new disease cases, and development of better diagnostic tests and treatment options.

I hope our Canadian colleagues will allow us to share what we have learned in the United States in managing Lyme and other tick-borne illnesses. Patients need all parties to come together, with complete objectivity and untainted political agendas, to tackle this disease. Patients need both the research and academic sectors, as well as treating physicians, like myself, who have been on the frontline clinically, to share their knowledge and expertise.