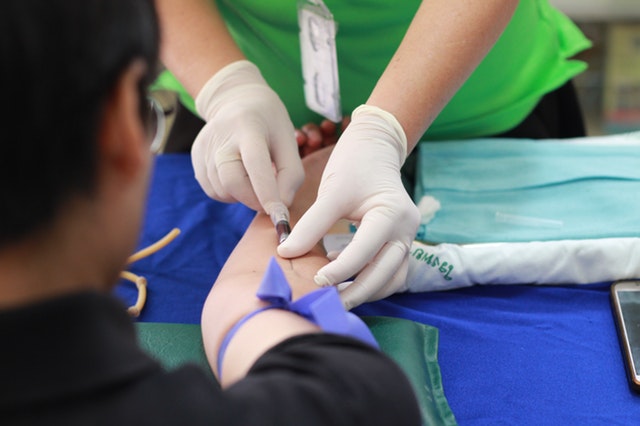 Researchers now know that the tick-borne disease Babesia can be transmitted unknowingly through blood transfusions. But what about transfusion-associated Lyme disease? The risk is unlikely, but it is a concern worth considering, writes Pavia and Plummer. [1]

“Borrelia are likely to be found circulating in the blood sporadically or they may persist for a time period ranging from 2 to 5 weeks and in some cases beyond this time frame,” writes Pavia, citing a 2001 study by Wormser and colleagues. [2]

It is unlikely that an individual will donate blood if they have had a tick bite, erythema migrans (EM) rash or were ill, the author writes. But there could be donors who are unaware they have Lyme disease. They may not have seen a tick bite or EM rash and may be asymptomatic and not exhibiting any symptoms of the disease. This, in turn, would pose a theoretical risk.

After all, researchers have shown that it is possible to transmit B. burgdorferi spirochete in mice.

“B. burgdorferi can be transferred from spirochetemic donor mice to naive recipients during an experimental blood transfusion that closely mimicked typical human blood transfusion procedures,” according to a study by Gabitzsch. [3]

Investigators, however, do not know if transmission can occur if the blood is stored under blood-storage conditions.

Furthermore, another Borrelia species, B. recurrentis has been shown to cause transfusion-associated relapsing fever, the authors point out. And these microorganisms share several common elements.

It is also possible to transmit via transfusion the tick-borne pathogen Borrelia miyamotoi.

“Borrelia miyamotoi, was able to survive and infect mice after being kept under standard storage conditions with human blood or most of its component parts, suggesting that transmission by blood transfusion of this pathogen was possible,” explains Thorp. [4]

The tick-borne disease Babesia can be transmitted through blood transfusions. But what about Lyme disease? Should we be concerned? Click To Tweet

Additional studies are needed to determine the risks and reassess the blood bank criteria.

“It is necessary to consider determining what the optimal criteria and policies should be, such as the appropriate use of approved diagnostic methods, for monitoring blood products for possible contamination with the Lyme disease spirochete, especially in geographic areas in which B. burgdorferi infection and other related tick-borne diseases are endemic,” Pavia writes.

Transfusion-transmitted Babesiosis popping up in more states in USA

6 Replies to "Could a blood transfusion transmit Lyme disease?"