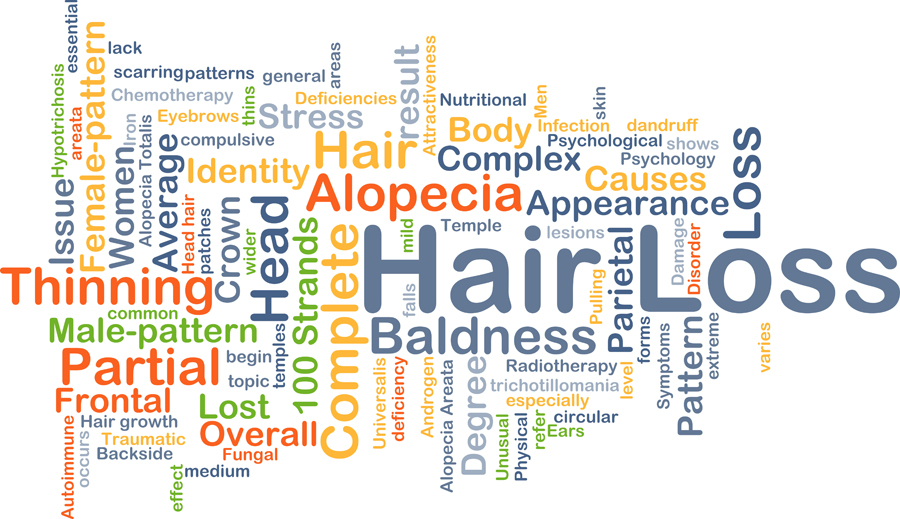 We thought we had enough problems with the discovery of chronic Lyme disease, Lyme encephalopathy, and neuropsychiatric Lyme disease. [1] Hair loss could be the last straw.

In a recent issue of the American Journal of Dermatopathology, Lynch and colleagues report on the case of a 21-year-old man who suffered hair loss following a tick bite to the scalp. [2] The man presented with nonscarring alopecia, a pattern of hair loss similar to alopecia-areata, also known as spot baldness.

Tick bite-induced nonscarring alopecia typically presents as patches, often described as “motheaten” or patients may have nodular, blood crusted lesions. According to the authors, symptoms include pain, pruritus or swelling. “There is usually a history of tick bite to affected areas, but lack of patient-reported tick attachment does not rule out this diagnosis.”

The patient’s nonscarring tick-borne alopecia was complicated by external trauma including hair pulling and lichen simplex chronicus, a condition of thick, leathery, brownish skin caused by chronic itching and scratching.

There is good news for nonscarring tick-borne alopecia. “Because few hair follicles are truly destroyed in this form of tick bite alopecia, hair regrowth is commonly observed, usually within 3 months; [3-5] however, alopecia has been reported to persist for 5 years after healing of local reaction to tick bites,” according to a series of four papers cited by Lynch. [6]

A scarring form of tick bite alopecia has also been described in Europe. “Tick-borne lymphadenopathy syndrome, classically transmitted by ticks of the genus Dermacentor and caused by Rickettsia slovaca infection, is an emerging entity typically seen in Europe,” according to Lynch. “Doxycycline remains the treatment of choice.”

Generalized hair loss, as well, has been described in Lyme disease patients. [7] “Diffuse alopecia occurred within three months after the outbreak of disease in 3 out of 23 (13%) patients with Lyme meningitis and in 40 out of 71 (56.3%) patients with tick-borne encephalitis,” according to Cimperman from the University Medical Centre, Ljubljana, Slovenia. “The mean duration of alopecia was 2 to 3 months and alopecia was reversible in all patients.”

There are a number of causes of scarring and nonscarring alopecia including autoimmune conditions, such as lupus, diabetes and fibromyalgia. [8] Moreover, medications used to treat systemic autoimmune disease and fibromyalgia have also been associated with alopecia.

Hair loss can impair the quality of life of patients with systemic disease. “Patients in remission from their global systemic disease are often left with alopecia, which significantly impairs their self-esteem and interferes with their personal and professional lives,” according to Moghadam-Kia from the University of Pittsburgh Medical Center. “This situation is often not adequately recognized, and withdrawal from social and work functions often leads to or augments long-standing depression in the patient.”

“To the authors’ knowledge, this is the fifth report of nonscarring tick bite alopecia in the literature and the first in an adult patient,” writes Lynch. There are undoubtedly many more undocumented cases of Lyme disease patients suffering from not only generalized hair loss but from tick-borne alopecia. The authors are to be congratulated for bringing attention to an under-recognized medical condition which can greatly impact patients’ lives.

My son has had significant hair loss since suffering from a tick bite on his head. What tests should I ask for and is it reversible?

The literature is sparse on the subject. The generalized hair loss may reflect the stress of the tick borne illness. It would be helpful to treat for Lyme disease if present. It would also be helpful to work with a dermatologist.

Dr. Daniel Cameron, after almost 15 years of severe leg pain , fatigue, odd sensations of being covered in spider webs and a long list of other symptoms, I have recently been diagnosed with Lyme disease. With all of my research , this is the first time I have heard someone address the “hair pulling” associated with the hair loss and Lyme disease. As if the other symptoms were not enough but the hair loss and overwhelming urge to constantly pull my hair is about to make me crazy. I cannot find any doctors here in Arkansas. Please help. I feel I am slowly waisting away.

I am encouraged when doctors from different specialties include Lyme disease in their discussion. You may want to check with the Global Lyme Alliance for names.

My husband is positive for Lyme….had blood work and western blot.severe symptoms.extreme pain in legs.has been affected by the 3 months of doxycycline but managed to get thru it.age 70 probably misdiagnosed for over 3 years even tho we took tics to dcitir….because the mindset is non belief. you were recommended by our pharmacist as they next step.5706654161

I had been struggling for at least the last 3 months with symptoms of Lyme disease but didn’t know what it was from. I had many tests done, including bone marrow, but nothing came up. I went to my primary doctor in desperation last week and he ordered a few tests including a Lyme disease test. The line came up positive but they would not readily treat me until they got the Western blot back. I complained so they gave me some antibiotics but when the Western blot came back negative the Dr said I do not have Lyme even though my symptoms are almost identical. I understand it could be something else but I have been tested for lupus a couple years ago and it was negative. Plus my symptoms only kind of match Lupus whereas they pretty much identical to Lyme disease. I push to get antibiotics or continue with another doctor?

The two tier criteria required a positive ELISA and Western blot. Doctors are divided over whether to use clinical judgment for patients who are not positive by the CDC’s two tier diagnostic criteria.

That lack of clinical diagnosis violates the principle of “Do No Harm”. The ones that are scared end up doing harm. My doctor is a scared one. I guess they have to obey the head of the practice as well as their own conscience. Surely they can see not being able to walk properly. Yes, getting things off my chest.

pls pls pls find another dr. it sounds 100% you have lyme. Tests are unreliable at best. Igenx you will get accurate test but a mainstream dr most likely wont use it, so find dr who will. You gotta dig.

Glad to see an article addressing Lyme related Alopecia. As a 28 year old woman dealing with not just Lyme disease but now also losing a majority of my hair due to alopecia that the Lyme triggered; it has been a very difficult journey learning to accept the unexpected changes that both have brought to my life. Unlike in the article though my tick bite was not on my scalp but rather on my leg and the alopecia didn’t actually develop for 2 years after. I have now been dealing with worsening alopecia hair loss for the last year despite ongoing Lyme treatment. I would be more than happy to provide any additonal information about my case if any more research is needed regarding this topic.

I was happy to hear a discussion of his all important topic in the literature. Thanks for sharing your story.

wpDiscuz
39
0
Would love your thoughts, please comment.x
()
x
| Reply
You are going to send email to