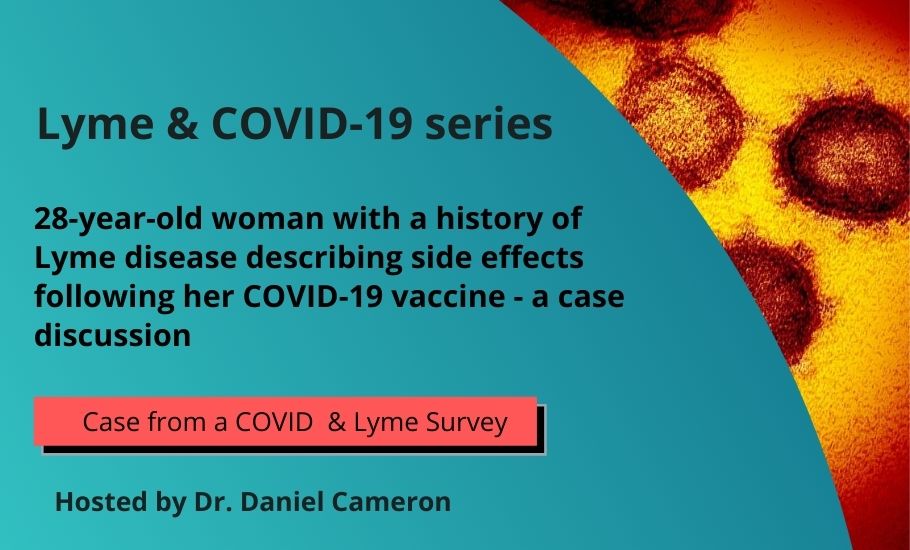 Dr. Cameron's latest Inside Lyme video podcast discusses the case of 28-year-old woman with a history of Lyme disease who shares the side effects she felt following her COVID-19 vaccine.

A 28-year-old single white Latina woman with a history of a tick bite and erythema migrans rash who contracted Lyme disease while on vacation. She was not able to finish her college degree and was unemployed at the time of the survey. She had a positive IgG Western blot test for Lyme disease and was also treated clinically for Bartonella. She had been ill with Lyme disease since she was 16 years old. She was treated with Zithromax, Vancomycin, Levaquin, and IV ceftriaxone.

In May of 2021, she took the Pfizer vaccine. In response to the vaccination, she had a slight headache, some fatigue, and pain in her arm at the injection site. Her symptoms lasted less than 48 hours.

Her symptom burden is captured by the General Symptom Questionnaire-30 (GSQ-30), with a score of 43 out of 120, which was higher than for patients with a traumatic brain injury (TBI) but lower than patients with depression and Post-Treatment Lyme disease Syndrome (PTLDS) (see below for interpretation of the GSQ-30 score).1

She did not feel her Lyme disease had worsened as a result of the vaccine. She strongly encouraged others to take the vaccine.

Meaning: Contrary to common concerns, the COVID-19 vaccine did not worsen the symptom burden for individuals with a history of Lyme disease. Instead, the symptom burden was significantly lower relative to those who were not vaccinated. However, it remains possible that a small number of individuals would have negative reactions to the COVID-19 vaccine.

Links to Lyme and COVID-19 series