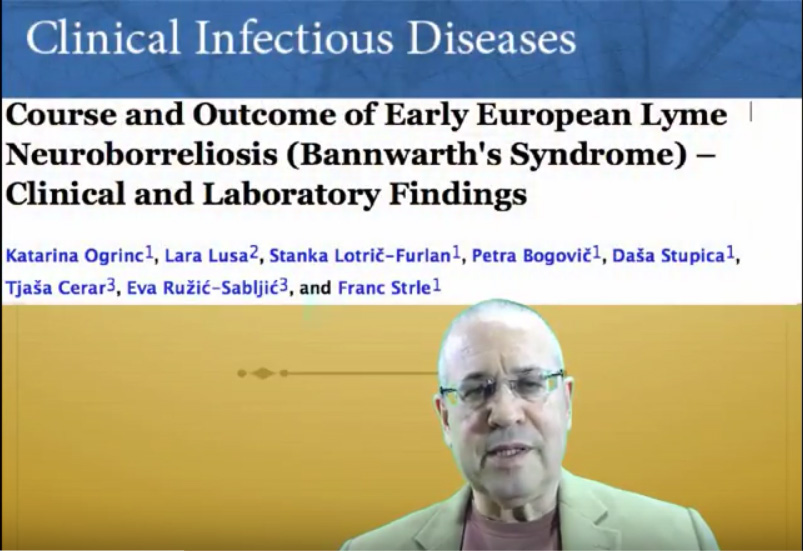 There are physicians who continue to advise patients that 2 weeks of antibiotics is sufficient for treating Lyme disease (LD). [1,2] Their position has not changed despite the growing recognition that Lyme disease complications can occur after 2 weeks of antibiotic treatment. These difficulties include chronic neurologic LD, [3] Lyme encephalopathy, [4,5] Post Lyme disease, [6] and Post-Treatment Lyme Disease Syndrome (PTLDS). [7]

A recently published clinical trial from Slovenia offers insight into the problems with prescribing a two-week course of antibiotics. Researchers described the outcome of treating 77 patients with early European Lyme neuroborreliosis, sometimes referred to as Bannwarth’s Syndrome. [8]

The most frequent symptoms/signs were radicular pain, sleep disturbances, erythema migrans, headache, fatigue, malaise, paresthesias, and peripheral facial palsy. Meningeal signs and pareses were present in 19.5% and 7.8% respectively. One patient with radicular pain had a complete heart block and a lymphocytic pleocytosis by spinal fluid examination. [8]

Only 2 of their 77 patients were treated with more than two weeks of antibiotics:

Authors of the Slovenia trial identified several problems with the 2-week course of antibiotics.

1.) Antibiotics often had to be repeated. “Antibiotic therapy was repeated within 3 to 6 months in 20/77 (26%) patients because of unsatisfactory clinical response to the first treatment (3 patients), persistence of CSF cell count >10×106cells/L (8 patients), or both (9 patients),” according to Ogrinc. [8]

2.) Treatment failures were identified at the end of 6- or 12-month follow-up, despite retreatment. “Unfavorable long-term clinical outcome was observed in 9/74 patients (12%) and consisted of intense/annoying nonspecific symptoms, persistent PFP, or remaining pareses that influenced functioning,” Ogrinc points out. [8]

3.) Poor outcomes after 2 weeks of antibiotics occurred despite the relatively short duration of illness. The median duration of illness was 30 days for early European Lyme neuroborreliosis. Twelve of the 77 patients (15.6%) were ill for less than 2 months. [8]

Poor outcomes were also recently reported in a Netherlands’ study. [9] The 98 patients with persistent Lyme disease symptoms demonstrated only a slight improvement in their quality of life following a 2-week course of intravenous ceftriaxone. The physical-component summary score, which measures their quality of life, rose by only 3 points to 34.8. Their quality of life remained below that of cancer and heart attack patients.

Such findings are not limited to the European continent. A study in the U.S. found that despite a 3-week course of antibiotics, more than one-third of patients who presented with a erythema migrans rash were ill at 6-month follow-up.

None of the patients described by Aucott were retreated as described in the Slovenia study. Instead, Aucott and colleagues concluded that their patients suffered from a Post-Treatment Lyme Disease Syndrome (PTLDS). Aucott noted, “Patients who developed PTLDS had significantly lower life functioning compared to those without PTLDS.” [7]

As doctors, we must develop better treatment regimens than the two- to three-week courses of antibiotics described in the Slovenian, Netherlands, and Aucott trials in order to avoid treatment failure. [7-9]

Dr. Daniel Cameron discusses in an All Things Lyme video blog the shortcomings of a recent study suggesting that 2 weeks of antibiotic therapy is effective in treating Lyme disease.

No Replies to "Video Blog: More problems with 2-week course of antibiotics for Lyme disease"