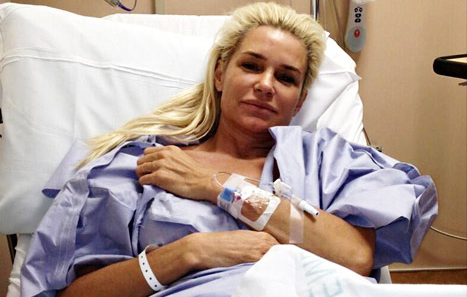 Real Housewives of Beverly Hills star, Yolanda Foster, has made national headlines the past few weeks sharing her most recent struggles with Lyme disease. "Most of you know I have been battling Lyme disease for the past three years. I wasted the first year trying to get diagnosed and spent the next two trying to find a cure,” the 51-year-old former Dutch model writes in her blog. “Unfortunately, I was only able to get to about a 60% recovery until I relapsed in early December and have not been able to find my way back. I’ve lost the ability to read, write…”

As her story continues making headlines around the country, there appears to be a sense of uneasiness among many people discussing Yolanda’s situation. When OK magazine called recently, I was asked by the reporter, “Can Lyme really cause problems like this?” The possibility that a disease, which began with a simple tick bite could progress to the point of causing such severe debilitation can be frightening.

In 1990, Drs. Logigian, Kaplan and Steere published, “Chronic neurologic manifestations of Lyme disease” in the New England Journal of Medicine [1] in which they described 27 individuals, who suffered for 3 months to 14 years with chronic neurologic Lyme disease. Their patients suffered from memory loss (81%), depression (37%), sleep disturbance (30%), irritability (26%) and difficulty finding words (19%).

Their conclusion? “Months to years after the initial infection with B. burgdorferi, patients with Lyme disease may have chronic encephalopathy, polyneuropathy, or less commonly, leukoencephalitis.”

There is treatment for the cognitive problem Yolanda is describing.  Drs. Logigian, Kaplan, and Steere found that two thirds of patients with Chronic Neurologic Lyme disease improved with two weeks of intravenous antibiotics but the outcome was seldom complete.  The same authors found the outcome was better for patients with Lyme encephalopathy following four weeks of intravenous ceftriaxone. [2]

“My husband has to write for me sometimes. My hands don’t want to hold the pen or are shaking too bad.”

“I had to leave a job that I loved because English no longer felt like a language I knew.”

“I had to leave my clinical social worker position because I was unable to complete documentation. What once took me 5 minutes would take me a half hour or more, just to find a common clinical term and string together a couple sentences.”

“I dropped out of my PhD program because I couldn’t organize a single paragraph anymore.”

“Once an excellent speller…can’t remember how to spell simple words sometimes.”

“My daughter had to take a medical leave from college.”

“At work I had people write things down because I couldn’t process the information. Horrible…and be a single parent. I went from three jobs to barely working.”

I find it hard to believe that 25 years after Chronic Neurologic Lyme disease was first described, the medical community can doubt Yolanda when she writes, “I have lost the ability to read, write, or even watch TV, because I can’t process information or any stimulation for that matter.”

What she is describing, is what has been described in the medical literature over and over. I have written several papers addressing the severity of chronic Lyme disease in patients, which includes neurological impairments.

We need to move on from denying that Chronic Neurologic Lyme disease exists to discussing what can we do about it.

Our son has been ill for over 15 years. We know of 2 tick bites one at age 2 then again at 4. Symptoms of twitches and eye rolling started at age 6. The said he had absence seizures abut all these years later 11 med failures. Nothing stops the seizures, and he hasn’t been able to put in a full day in 6 years. He has missed his entire high school experience. Now 21. He can no longer do math or anything that requires strategy. This from an “A” student and a boy who put together 3000 piece lego sets.
Finally diagnosed with Bartenella. he has big red horizontal lines on his back. We were told they were growth mark.
We just did our first round of IVIG and the first week was great. But now his seizures are really frequent. His neuro, who doesn’t believe in Lyme says this proves that IVIG is not working so he doesn’t want to do more. We have a Lyme Dr. but they don’t do much IVIG and aren’t sure. We are in the dark and don’t know how to help him.
Any advice would be appreciated.

Tick-borne infections can be frustrating. There can be more than one infection in a tick e.g. Babesia that requires a different treatment strategy. It is also important to include other doctors to rule out other illnesses.

I believe that I have had neurologic lyme for a long time now, looking back at some of my symptoms, but recently was stricken down with it by a fever first followed by 3 days of unbelievable pain, then a few days of severe neck, face and head pain which landed me in the hospital. Only to find out that I had Lyme, Meningitis, Encephalitis. After spending a week in the hospital I was sent home with a pic line and meds to lay in a hospital bed in constant pain. It has been a total of 6 weeks now, I’m still in pain, not getting much better except for the headaches, and I can’t seem to find anyone that can help me without prolong antibiotics. Isn’t there anyone out there that can help me without destroying my body to rid it of this disease? The doctors I am seeing now want me to continue the meds and they want to add more antibiotics. My gut is torn up now, I can’t take much more. I run 3 businesses which I haven’t been able to do for 6 weeks and I see no promise of doing that again any time soon. Please if you have any suggestions or help I can seek I would greatly appreciate the information. I am willing to go where I need to, to get well……

You are not alone. There are others that find it difficult to balance the complications of treatment against the difficulties living with the illness. You may even suffer from another tick borne illness. For example, IV antibiotics do not treat Babesia. Finally, you should rule out other illness unrelated to tick-borne diseases.

My journey is the same as many I see all the time online. Thank God for the online community supporting one another because our Government, healthcare system, and especially our doctors should be ashamed of themselves. I don’t like to compare this to the AIDS crisis because that was a horrifying time in our history, but it’s has such strong similarities. I grew up less than 150 miles from Plum Island and Lyme CT – bit by ticks in summer months growing up in NH. My story is a book. I’m 51 now and just finally got diagnosed 7 months ago. I am bedridden and this was not necessary. Thank God I finally found a doctor I feel comfortable treating with and I do have hope that I can at least regain some quality of life back. For me, that’s all it’s about now — quality of life!

I know exactly how she feels! I have the exact same problems, had it for 20 years…..just about my whole adult life! Of course, it went undiagnosed for 14 years……

So how are you treating beyond ceftriaxone? IViG?

wpDiscuz
10
0
Would love your thoughts, please comment.x
()
x
| Reply
You are going to send email to