Baby boy with Babesia. An Inside Lyme Podcast. 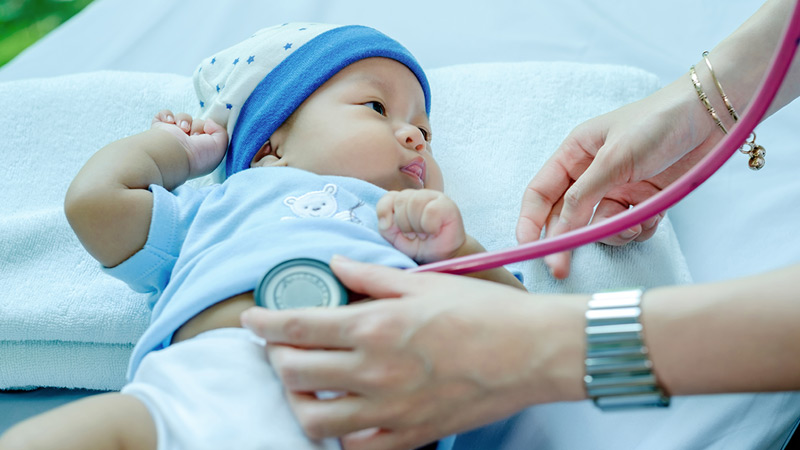 Welcome to an Inside Lyme case study. I find that the best way to get to know Lyme disease is through reviewing actual cases. In this case study, I will be discussing a 6-week old baby boy with Babesia. This case series will be discussed on my Facebook and made available on podcast and YouTube.

In this episode, I will be discussing a 6-week old baby boy with Babesia.

This case was described in the journal Pediatrics, written by Handel and colleagues in 2019.

The baby boy was seen in an emergency department in Long Island, New York, an area endemic for Lyme disease.  The baby spent “minimal time outside,” according to Handel.  There was tall grass in the yard and the father painted home exteriors. The parents did not report seeing a tick. Instead, the parents removed a bloody “ﬂea” from his arm 20 days before hospitalization writes Handel

This highlights the difficulties parents can face in recognizing a tick.

Babesia is a parasitic disease that is typically contracted by the same tick that carries Lyme disease. Click To Tweet

The baby boy with Babesia was irritable, throwing up, not eating well, and had a temperature of 101.1°F. The doctors were initially not able to identify the reason the baby boy was ill or why there was anemia or a low platelet count. The doctors prescribed three antibiotics – ampicillin, ceftriaxone, and vancomycin until they could determine a cause of the illness.

The baby boy was transferred to a second hospital. The blood tests again showed anemia and a low platelet count along with abnormal liver function tests. The spleen appeared large. The laboratory tests now revealed the parasite Babesia in the red blood cells under the microscope.  3.6% of the baby’s red cells showed parasites seen with Babesia.

Babesia is a parasitic disease that is typically contracted by the same tick that carries Lyme disease.  Babesia can also be contracted through the blood supply or during pregnancy.

The baby boy with Babesia was prescribed oral atovaquone and intravenous azithromycin.  These drugs are marketed as Mepron and Zithromax in the US. The anemia worsened. The hemoglobin dropped to 6.9 gram/dl, which is quite low. The doctors transfused a unit of blood. The doctors were concerned that the baby might also have suffered from Lyme disease. The doctors added 14 days of amoxicillin to the treatment.

The baby remained well on follow-up, according to the doctors.

We need more doctors with skills diagnosing and treating Babesia in children. We could use a reliable test to determine who has Babesia and a test to be sure Babesia  has resolved. We need to determine the best course of treatment for babies. We hope that if a professional sees a baby that they can use this case to remind them to look for Babesia and treat accordingly.

No Replies to "Baby boy with Babesia. An Inside Lyme Podcast."

Some Lyme disease patients require anesthetic evaluation before a procedure.

I am reluctant to mention lyme to my doctors any more. I've been under anesthesia more than a dozen times and have never been asked. I feel like they should be more aware.

I educate my drs whether they want it or not. Anesthesiologist was glad I told him I had Lyme & the MTHFR mutation when I had my hysterectomy in 2017

Doctors do not want to acknowledge lyme disease..mention it and you are totally blown off...

A team of researchers has discovered that tick saliva suppresses the skin’s protective function, increasing the risk of infections like tick-borne encephalitis (TBE) or Lyme disease. ... See MoreSee Less

The authors suggest, This case "highlights the importance of close follow-up so that early pacemaker explantation can be arranged if clinically indicated."

Successful removal of pacemakers in patients with Lyme carditis

I live in an extremely high prevalence area for Lyme, had a known tick bite/rash/fever and positive test before my onset of AV block (in my 20’s). Of 6-7 cardiologists I’ve been to, all of whom are aware lyme was involved at the onset of symptoms, not a single one ever attempted to get IV antibiotics or try anything to reduce my need of my pacemaker (I’m paced 100%). In my experience, the chances of a cardiologist considering lyme or agreeing to remove a permanent pacemaker are very very slim. I’ve been to 7 cardiologists across 3 endemic states (VT, NH, MA) and not a single one has ever attempted to address my heart block via lyme treatment.

You support IV antibiotics? I had 3 dewormers 7 days and With only 7 days of IV Cefoxitin I was cleared I’ve not had a flare ever since

In #Oregon, they exhaust your #medical #diagnostic (what literally floats the #OregonEconomy) #insurance limits; Then shrug it off... Providers "can't say what's wrong with you". This is a pure: "I'M AFRAID TO TELL YOU THE TRUTH", because the #OregonMedicalBoard will sanction your license... #OregonMedicalPolicyBoard is more corrupt than a steam bent plank on a wooden ship!!! #Oregonsmedicalpolicies ~ Located within the #OregonNationalCaves! Thanks #TravelOregon; I always wanted to locate the state's #LymeDisease public health policy... can't find one anywhere. #LYMECRYMES continue daily Welcome your kid to #OSU or #UofO; Where your kids come, get infected; then never know what Oregon donated to em for the rest of their sick lives... and their children. #Dispicable Congress has announced we have a major Lyme Disease problem, WTF can't Oregon??? Lyme patients deserve EQUAL RECOGNITION that is EQUITABLE TO all OTHER CRITICAL HEALTH CONDITIONS in ALL PUBLIC LISTINGS. FAILURE TO TREAT = HARM!!! #Lyme #LymeDisease #LymeRightsNOW t.co/xD6c9iwzqk traveloregon.com/things-to-do/culture-history/historic-sites-oregon-trail/explore-the-oregon-cave...

I never believed I will be cured from Lyme disease I was diagnosed for over 2 years, with different treatments there was nothing to help me, A friend of mine introduced me to Doctor Lefe who is a herbs practitioner, after I used his herbs products It was like a miracle, a dream come true for me and my family. I live free health today with all my symptoms gone. am here to also let the world know my story. This is his page link www.facebook.com/Drlefeheralcure/ you can contact him on I will be totally grateful to him and I recommend him to everyone Diagnosed too.

They don't want us to know that we can cure our self instead they give us chemicals which is the drugs prescriptions they give to us to suppress our health issues all these was cleared to me when i met a natural herb healer in west Africa Online He told me everything i needed to know about our immune system and gave me natural medications to Cure My stage one cancer, and after two weeks of treatment i was fully recovered all thanks to the Africa herbs and Dr Gbojie his page: Dr. Gbojie Natural Cure

By treating babesia by chance?