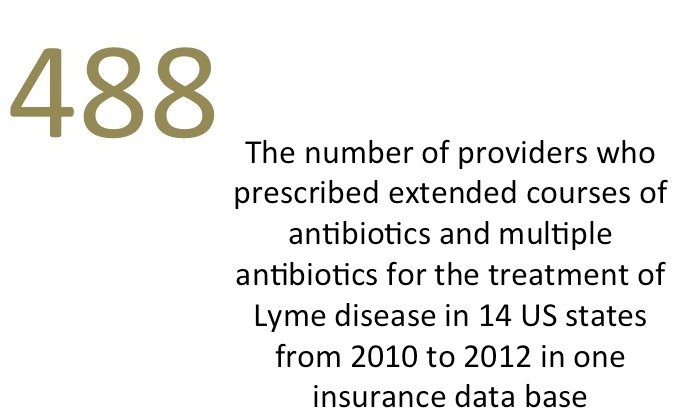 There are a handful of hot button issues surrounding Lyme disease that are sure to ignite a firestorm of debate within the medical community; among them is the duration of time required to effectively treat the disease.

The Infectious Disease Society of America (IDSA) has long insisted that a maximum antibiotic course of 21 days is sufficient to eradicate the Lyme bacterium, while the International Lyme and Associated Diseases Society (ILADS) recommends a longer course of therapy with duration dependent on response to therapy. [1]

So, what treatment approach are physicians adopting in their own clinical practices? And how frequently are they prescribing multiple antibiotics to treat the disease? A recent study by Tseng and colleagues, published in the August issue of Clinical Infectious Diseases, aimed to answer those questions. They discovered, after reviewing insurance claims data, “that the use of extended courses of antibiotics and multiple antibiotics in the treatment of Lyme disease has increased in recent years.” 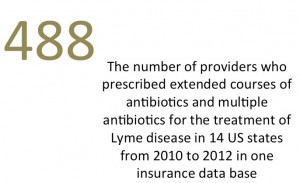 Typically, studies only include Lyme disease patients who meet the Centers for Disease Control and Preventions’ (CDC) two-tier diagnostic testing criteria. All others, are excluded. However, the two-tiered antibody testing is not an accurate method, since it requires positive results on both the poorly sensitive ELISA and Western blot tests. In fact, previously, a study conducted by Wormser and colleagues concluded that only one-third of well-characterized Lyme disease patients could be confirmed by the CDC’s two-tier diagnostic criteria. [3]

Since this study is all-inclusive and not restricted by patients passing the two-tier test, it offers a unique insight into actual treatment practices and is more representative of the patient population afflicted with Lyme disease.

According to the study, 18% of Lyme disease patients were treated for more than 5 weeks (defined as extended therapy by the authors). The actual length of time patients were prescribed antibiotics was much longer with an average of 86 days. Treatment duration ranged from 35 to 404 days.

However, the findings that hundreds of other providers, listed in a single insurance database in the Northeastern U.S., prescribed extended antibiotics was surprising. In other words, 472 doctors treated the remaining 80% of Lyme disease patients with extended therapy.

It was also surprising to find that those 16 doctors actually did not differ from their 472 peers in prescribing extended courses of antibiotics. However, the prescribing patterns did differ between the 16 doctors, who treated more than 20% of the Lyme disease patients, and their 472 colleagues, when measuring the average number of antibiotic exposure days, the number of refills in the longest drug era, and the combination of antibiotics prescribed.

The authors did not address why 488 doctors treated their Lyme disease patients longer than the 21 days recommended by the 2006 Infectious Disease Society of America (IDSA) evidence based guidelines. [1]

In addition, the authors did not mention that there are, in fact, doctors who have recommended extended antibiotic therapy for select patients based on a risk-benefit assessment and shared medical decision. [4] The following excerpt from the International Lyme and Associated Diseases Society (ILADS) evidence based guidelines describes the risk–benefit assessment needed when making a shared medical decision.

“The clinical population of patients with persistent manifestations of Lyme disease is heterogeneous; therefore, the risk–benefit assessment needs to be done on an individualized basis, taking into account the severity of an individual’s persistent disease, their responsiveness to treatment, their ability to tolerate side effects associated with additional and potentially long-term treatment as well as their willingness to accept the risk associated with antibiotic treatment or, conversely, the level of their desire to avoid treatment-associated risk.” [2]

Medical societies continue to debate the optimal treatment regimen. In the mean time, doctors have to use clinical judgment when treating their Lyme disease patients. The paper demonstrates that hundreds of doctors are choosing extended antibiotic therapy in an effort to successfully treat their patients.