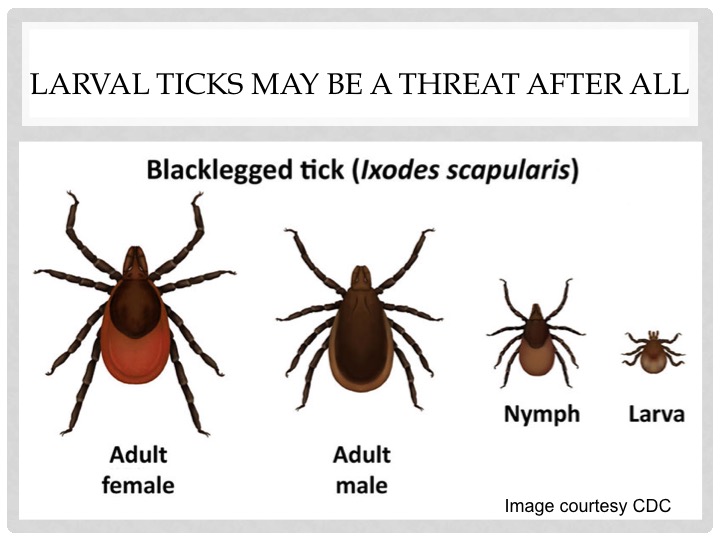 The tiny larval tick has never been considered a threat to humans. Experts had long believed that an adult female tick could not pass on any infections to the eggs and larvae. As a result, ticks in the larva stage were thought to be free from carrying diseases and therefore, harmless. But that may not necessarily be the case, according to a case series by Philip Molloy, MD and colleagues, published in the Annals of Internal Medicine. [1]

When ticks hatch from eggs, they’re called larva. At this stage, they have only six legs. After taking their first blood meal, the larvae molt into 8-legged nymphal ticks. Most studies have identified blacklegged ticks in the nymph stage as posing the greatest threat to humans. But Dr. Molloy now raises concerns that these newly hatched larvae, which are microscopic in size, may be just as dangerous. 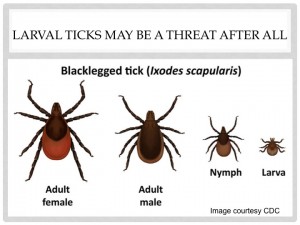 While investigating the clinical spectrum and effectiveness of laboratory testing for Borrelia miyamotoi disease (BMD), one of the newer tick-borne infections, Dr. Molloy found that most cases occurred in July and August. These are the months when larvae ticks are most active, compared with nymphal ticks, which are most abundant in June and early July.

The timing of BMD peak incidence in Dr. Molloy’s case series  suggests that infection might be transmitted by unfed larval ticks that acquired it by transovarial transmission from the infected female tick.

“Bites from larval deer ticks have not been considered a health threat, but this needs to be reevaluated,” writes Peter J. Krause, MD, from the Yale School of Public Health and Alan G. Barbour, MD, from the University of California – Irvine, in an accompanying editorial.

The authors also did not dismiss the possibility of acquiring Borrelia miyamotoi through blood transfusions. ”Human-to-human transmission by blood transfusion is theoretically possible, but a transfusion associated case has not been reported to date.”

How do we know if we are ill with BMD if we cannot detect a larval tick during a tick check? In the Molloy case series, BMD was clinically similar to human Anaplasmosis, including abnormal aminotransferase levels, leukopenia, and thrombocytopenia. The blood smear, PCR, and/or antibody determination used to diagnose BMD for the study are not available in most commercial laboratories.

Until reliable tests for BMD are available, physicians will need to diagnose the disease based on a patient’s clinical presentations. Unfortunately, symptoms are similar to other tick borne diseases and acute viral infections, and can include fever, fatigue and headaches.

Read more about the need for laboratory developed tests to assist in diagnosing emerging tick borne diseases, like Borrelia miyamotoi. “Where is the FDA test for relapsing fever spirochete, Borrelia miyamotoi?”

Dr. Molloy writes, “a patient presenting with an acute ‘summer fever’ and no rash and testing positive by the whole cell antigen serologic test for Lyme disease could actually be infected with Borrelia burgdorferi, Borrelia miyamotoi, or both.”

A clinical diagnosis is tough when we do not know the full spectrum of the disease. The Molloy study only included patients who were treated acutely. The case series definition was limited to patients “who were acutely symptomatic with features or, whose laboratory findings were suggestive of a possible tick borne infection (typically fever, myalgia, flu-like illness, headache, or rash).”

continuing tick precautions even after the risk of Lyme disease has abated.”

The outcome of treatments remains uncertain when recommendations are made based on acute cases. Doxycycline or other tetracyclines, amoxicillin, or cefuroxime were effective based on a few case reports and a case series of acute cases. Zithromax was also presumed to be effective. The study was not designed to assess the long-term outcome of individuals with BMD who are treated acutely or those who are not.

Dr. Krause points out the importance of monitoring emerging infections, such as Borrelia miyamotoi. “On the basis of the current report and previous data, the frequency of Borrelia miyamotoi infection seems to be similar to that of Anaplasma phagocytophilum and Babesia microti.”