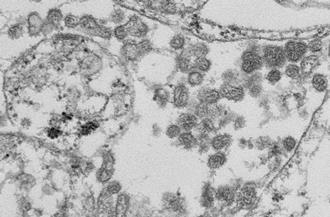 The Bourbon virus (BRBV), believed to be transmitted through tick or insect bites, was first identified in a Kansas man in 2014, who eventually died due to complications from the disease. And while only a handful of people have reportedly developed the virus, two have died from it.

In 2017, a 58-year-old woman from Missouri, who initially presented with generalized weakness, myalgia, nausea, and a rash, was diagnosed with the virus. She had been exposed to ticks one week earlier. She died after 23 days in the hospital.

The virus is so new that relatively little is known about it. Symptoms typically include fever, fatigue, rash, headache, body aches, nausea and vomiting.

There are no tests to diagnose the disease and no approved treatments or vaccines.

But now, for the first time,  researchers at Washington University School of Medicine in St. Louis believe they may have identified a potential treatment for the Bourbon virus.

Using a mouse model, Boon and colleagues discovered that the experimental antiviral drug favipiravir, used to treat influenza in some countries, cured mice infected with the virus. [1]

The authors “treated the mice daily with 150 mg/kg of favipiravir in 0.5% methylcellulose via oral gavage for 8 days beginning immediately after infection.”

“Without the flu drug, 100% of the infected mice died, and with the treatment, 100% survived,” states Boon, senior author of the study.

“Favipiravir may be a candidate drug for the treatment of BRBV [Bourbon virus] in humans,” the authors write. They also suggest that other RNA polymerase inhibitors could be used.

Findings from mouse study suggest that antiviral flu drug may effectively treat the Bourbon virus in humans. Click To Tweet

Then, to determine the effectiveness of favipiravir in mice after the onset of symptoms, the authors began treatment with 3 dpi with BRBV-STL. “At this time point, the animals were starting to lose weight and replicating BRBV-STL was detected throughout the body.”

One day after treatment began with favipiravir, the mice stopped losing weight and gradually recovered from infection, the authors write.

“Remarkably, all of the animals survived the infection, whereas the mock-treated animals all succumbed.” The study demonstrated that the broad-spectrum antiviral drug stops replication of the Bourbon virus.

“Up until now, doctors have not had any way to treat Bourbon virus. We’ve found something that works, at least in mice, and it suggests that antivirals for flu are a good place to start looking for a treatment for Bourbon,” states Boon.

Favipiravir is approved in Japan for the treatment of influenza but not in the United States.

No Replies to "Bourbon virus: flu drug to treat the deadly disease?"