Can Lyme disease be mistaken for herpes? 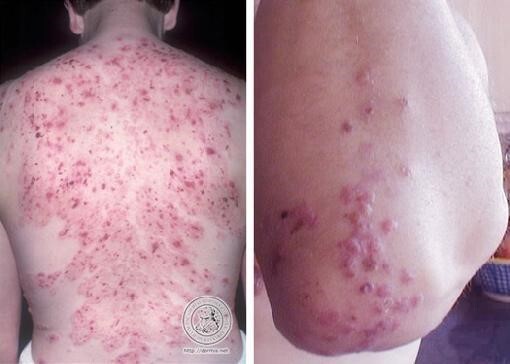 Only 1 in 4 Lyme disease rashes present in a Bull’s-eye pattern. In fact, lesions can appear as a flat red rash, a blistering rash, and a rash that resembles cellulitis. Investigators describe a woman with Lyme disease who presented with a rare variant of an erythema migrans (EM) rash, which appeared with a herpetiform center.

In their article “Disseminated Lyme disease with a herpetiform center,” Zhang et al.¹ described a patient who presented with a Lyme disease rash that could have been mistaken for herpes. The woman in her 30’s developed a herpetiform rash, which resembles herpes lesions.

Initially, the patient developed a “small red bump and surrounding swelling on her back,” along with a rash in her left armpit and left ipsilateral swollen lymph node.

She was prescribed cephalexin for a presumed cellulitis. However, the bumps became larger, warm and more painful.

“Skin examination showed a large, circular, well-demarcated erythematous plaque on the back with a central cluster of herpetiform vesicles, bullae, and purple necrotic puncta,” wrote the authors.

“This case showcases early disseminated Lyme disease with a herpetiform center, a rare cutaneous presentation, as well as an example of Jarisch-Herxheimer reaction in response to initiating treatment of Lyme.”

There were two additional erythematous patches on the breast and chest consistent with disseminated Lyme disease.

“She ultimately completed the full course of doxycycline with complete resolution,” the authors wrote.

The woman was diagnosed with vesiculobullous EM in the setting of early disseminated Lyme disease, systemic symptoms and a Jarisch-Herxheimer reaction after start of treatment.

A Lyme antibody screen was positive 6 weeks after treatment and confirmed with a Western blot test.

Others have also described blistering rashes in Lyme disease patients. “Vesiculobullous Lyme may be more common than previously thought, representing 8% of Lyme cases in a study of one diagnostic center in New York,” wrote the authors.

“While classic EM with central clearing is more recognizable, it is important to keep Lyme on the differential for atypical presentations of EM with central necrosis, hemorrhagic crusting, or vesiculobullous changes as observed in this case.”

8 Replies to "Can Lyme disease be mistaken for herpes?"