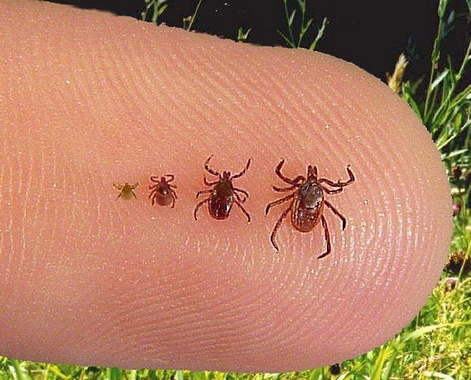 Nymphal and adult black-legged ticks, also known as deer ticks, harbor a growing number of pathogens. But researchers are now discovering that larval ticks, which are even smaller, may pose an equal threat to public safety as a new study describes larval ticks infected with the tick-borne bacteria Borrelia miyamotoi.

Unlike Borrelia burgdorferi, the causative agent of Lyme disease, female ticks infected with Borrelia miyamotoi can pass the bacteria to their offspring. “Therefore, in addition to nymphs and adults, larvae can vector B. miyamotoi to wildlife and human hosts,” write the authors of a new study, “Vertical transmission rates of Borrelia miyamotoi in Ixodes scapularis [black-legged ticks] collected from white-tailed deer.” [1]

The majority of Lyme disease cases occur in mid-summer, when nymphal black-legged ticks are most active, according to some researchers. But recent studies indicate that the majority of Borrelia miyamotoi cases occur later (July to September) during the larval questing period. [1]

Han and colleagues’ study aimed to evaluate the magnitude of vertical transmission “to understand better how B. miyamotoi is maintained in nature and to help predict disease risk from B. miyamotoi-infected larvae.”

To achieve this, “Hunters brought freshly-killed deer carcasses to check stations, and each carcass was inspected for ticks,” writes Han. Check stations were positioned in Maine, New Hampshire, Tennessee and Wisconsin in November of 2015 and 2016.

Out of 1,263 ticks collected, 33 were infected with B. miyamotoi. Most of the infected ticks were from Wisconsin. The remainder were from Maine (n=3), New Hampshire (n=2), and Tennessee (n=1). It was not clear how many deer were examined. Han and colleagues found:

Therefore, they conclude that “while nymphs pose the greatest epidemiological risk for several I. scapularis-borne pathogens, larvae may pose an important, and possibly the greatest risk for BMD [Borrelia miyamotoi disease] due to their high abundance and tiny size.”

Larval ticks may be a threat after all: insights based on study of Borrelia miyamotoi