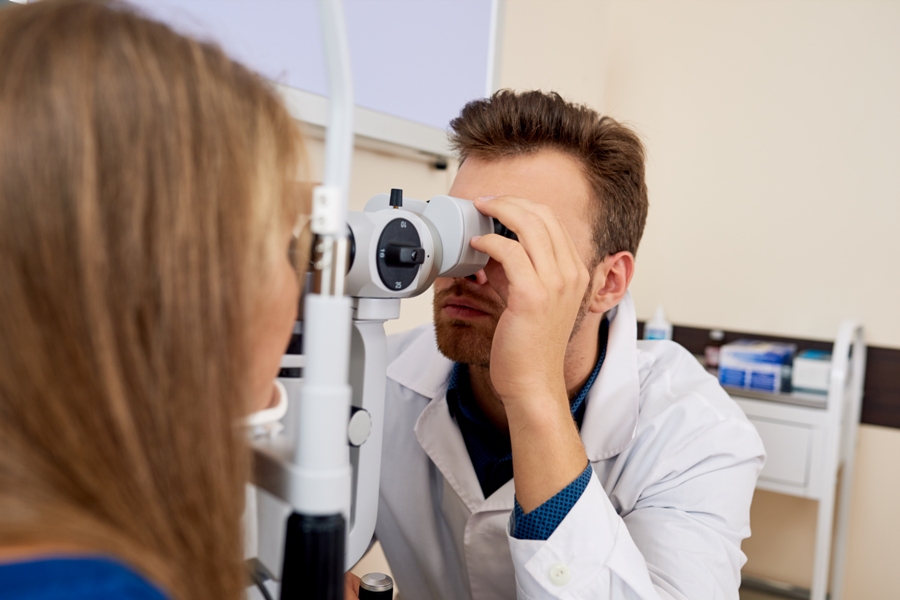 Ophthalmic manifestations of tick-borne diseases are increasing in the United States, according to a review published recently in Current Opinion in Ophthalmology. And, "although ocular involvement can be self-limited, delays in diagnosis may result in vision impairment and even blindness," stated Sathiamoorthi from the Mayo Clinic. [1]

The authors point out that optic neuritis, which is often seen in multiple sclerosis,  occurs in Lyme disease, as well. Furthermore, they remind readers that although it is rare, uveitis can also be found in Lyme disease (LD). “Findings include vitreitis, retinal vasculitis, cotton wool spots, choroiditis, macular edema and endophthalmitis,” stated Sathiamoorthi.  “In several cases, spirochetes were detected in vitreous material.”

Uveitis is inflammation of the uvea, which is made up of the iris, ciliary body and choroid. Anterior, intermediate and posterior uveitis as well as panuveitis has also been described. [2]

The “degree and frequency of ocular signs and symptoms varies widely between the different [tick-borne] diseases,” the authors point out.

These eye problems have been associated with a wide range of acute and chronic presentations. “Patients with anterior uveitis usually complain of pain, redness, blurred vision, and photophobia, watering,” according to Agrawal from the Medical Research Foundation, India. [3] “Most of the patients would have had repeated attacks and would have sought consultation with multiple ophthalmologists and would have used topical and/or systemic medications on and off.”

Ocular complications are infrequent but can be serious. “Complications such as macular edema, chorioretinitis and optic neuropathy may be vision-threatening and require treatment with corticosteroids as long as the recommended antimicrobial regimen has been instituted,” stated Sathiamoorthi.

The true incidence of eye problems in lyme disease, however, remains unknown. According to Sathiamoorthi, one case of seronegative uveitis was discredited. “At least one of the earlier case reports of Lyme uveitis found spirochetes in vitreous material, yet serological testing was negative for Lyme antibodies.”

The authors conclude the “degree and frequency of ocular signs and symptoms varies widely between the different [tick-borne] diseases.” Furthermore, opthamologists should be “alert to the possibility of an infectious cause depending on the patient’s risk factors.”

Erratic rapid eye jerks in a child with Lyme disease

My dad has severe inflammatory eye problems. His doctor suggested a cornea transplant. It did not work the first or second time. Last year, while thinking about having a third transplant, he tried IV ozone per Italian research. After fifth treatment one of his eyes exploded with a severe staph infection. He was placed on ABX and after five months it settled down but doctor says he needs another cornea transplant. Too much scar tissue. I would like him to try IV ceftriaxone first – and anti parasite drugs. Is it worth it? Do you glean anything from the results o his IV ozone treatments?
His IgE at the start of this mess was 49,000. I had him take H202 drops (diluted oral) for six weeks and his IgE went down to 600 and he lost 40 pounds all in the belly. He struggles with exczema too. The h202 was one year before the ozone. The h202 helped his belly but not his eyes.

Sorry to hear hear father is having problems. These two blogs addressed a broad range of eye findings seen in Eyes. Kudos to the author for reviewing what we know and don’t know. Our office does not have an ophthalmology on staff and therefore cannot answer your question.

Revisting Lyme and “the other” TBI | The VisionHelp Blog

[…] is a nice synopsis by Lyme expert Dr. Daniel Cameron of an article in Current Opinion in Ophthalmology on the growing […]

Hello Dr. Cameron,
In 2006, I developed optic neuritis. I was quickly treated with IV steroids, since my ophthalmologist thought that I had MS. An MRI which was done later showed no lesions, but after the IV steroids, I became covered in rashes, had fever, extreme headaches, slurred speech, forgot words, couldn’t add or subtract, and couldn’t remember what I had just done. I went to more doctors, and all tests came back negative. I searched online for answers and finally concluded that I might have Lyme disease. Doctors told me that was not possible because there was no Lyme disease in eastern WA State (even though I mentioned I had been to Maryland a few months prior.)
I finally found a doctor who agreed Lyme was possible. He ordered a western blot test, and it was positive. (I should probably mention that my husband also tested positive for Lyme disease, but never developed the severe symptoms I had and has never been treated.) I was treated for a year with tindamax and ceftin and my health improved, but the eye with the optic neuritis hemorrhaged and atrophied.
A little over a month ago, I became quite sick with bronchitis, and then some of those old symptoms returned…chills, sluggish speech, forgetfulness, inability to concentrate, staring blankly, headaches, light sensitivity, some double vision, and pain behind my eyes. A recent MRI now shows optic neuritis in the bad eye, although MRIs in 2006 and 2007 did not show optic neuritis in that eye at all. A recent visual field test shows areas of vision loss in my good eye. I am scheduled to see a neurologist in 3 weeks, but am afraid it will just be a repeat of 10 years ago…with doctors seeming more interested in trying to prove it isn’t Lyme disease than in doing anything to try to save my vision.
Do you have any advice for me, or information that I could share with my doctors that might help? In your opinion, what kind of antibiotic treatment is successful in treating neurological complications of Lyme disease? Do you have experience with or knowledge of any medical studies related to late-stage Lyme and vision complications? Thank you so much for your time.

I was reviewing the paper to better understand ocular issues for my patients. It can be difficult to tell the cause of optic neuritis. They may decide that two episodes of optic neuritis is enough to call it MS. You would have to work with your eye doctor and neurologist. You should also consider consultation with someone who has experience in Lyme disease.

I recently developed cataracts that came on quite suddenly. I’ve also been diagnosed with Fughs Syndrome (FS). Do you think FS in any way connected to Lyme or co-infections? I’ve been told that surgery for cataract surgery can be risky for people with FS and make things worse. Any thoughts on this, doctor?

Fuchs’ dystrophy also known as Fuchs’ corneal endothelial dystrophy or FCED, is a slowly progressing corneal dystrophy that usually affects both eyes. I was reviewing the paper to allow me to better understand ocular issues for patients in practice. You would have to ask your eye doctor.

What can be done about it??? My lyme came back after a year of remission. First symptom was in eyes…went to my eye Dr who said it was the ” most impressive” follicular conjunctivitis she had ever seen. Treated me with 4 rounds of antibiotic/ steroid eye drops and 2 weeks oral antibiotics. It never resolved and 7 months later sent me to Emory University. I saw the head eye Dr who said it was either chylamedia or lyme and 2 weeks of antibiotics and I would be fine(not)….I am soooo done with Allopathic doctors.
Ps…I have been using the Cowden and Buhner protocols for the last 10 months…still have the eye problems

I am happy to year you have sought different opinions. I am sorry to hear not of the approaches have resolved your eye problems. I hope the article I reviewed and this blog encourage other doctors to study the issues.

Can you please explain your eye symptoms?

The peer reviewed published article reviewed focused on the growing list of diagnoses associated with Lyme disease rather than the symptoms.

wpDiscuz
108
0
Would love your thoughts, please comment.x
()
x
| Reply
You are going to send email to