New treatments for Lyme disease on the horizon? 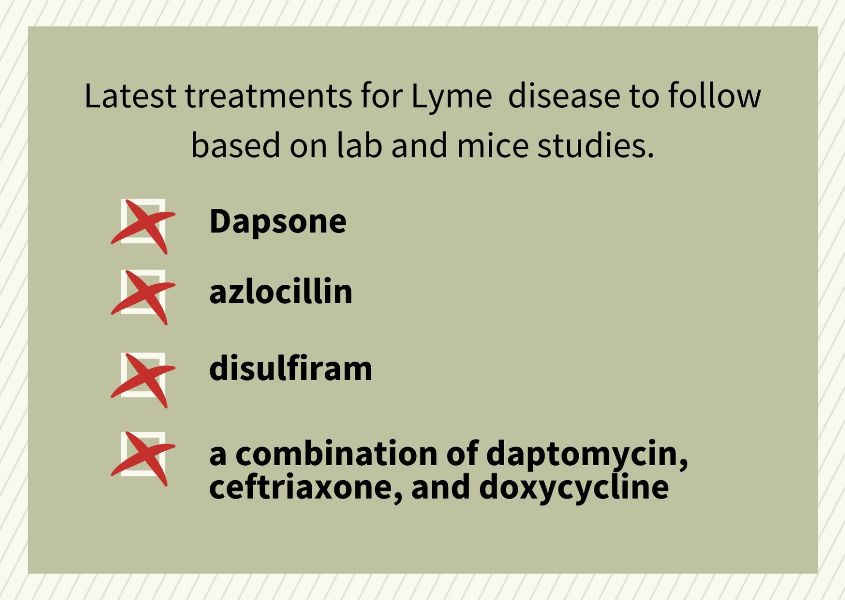 Patients with Lyme disease are typically treated with a standard antibiotic, which may include doxycycline, amoxicillin, or cefuroxime, for a 2 to 4 week period. However, studies have shown that between 36-63% of treated patients continue to suffer with persistent symptoms. [1]

Study findings suggest that current Lyme disease treatment may not eliminate the Borrelia burgdorferi infection or the immune system may fail to clear the infection or bacterial debris, resulting in ongoing symptoms. In the past few years, several new treatments for Lyme disease have been investigated in the laboratory or made available to patients in an effort to address chronic symptoms.

Horowitz et al. reviewed data from 200 patients to evaluate “the efficacy of dapsone combined with other antibiotics and agents that disrupt biofilms for the treatment of chronic Lyme disease/post-treatment Lyme disease syndrome (PTLDS).” [2]

They found that it “decreased eight major Lyme symptoms severity and improved treatment outcomes among patients with chronic Lyme disease/PTLDS and associated co-infections.”

This new treatment for Lyme disease was not without side effects, however. Horowitz reports 46 of the 200 patients stopped treatment due to an “adverse reaction.” The adverse effects were not specified.

When used for other conditions, dapsone’s side effects have included haemolysis, agranulocytosis, photosensitivity, skin eruptions, neuropathy, and toxic or cholestatic hepatitis. [3]

Disulfiram, a medication used to treat alcohol abuse, may be one of the new treatments for Lyme disease in the near future. Two small studies have shown positive results.

Dr. Kenneth Liegner reports that 3 patients, who required extensive, ongoing antibiotic treatment due to neurological Lyme disease and Babesia, “were able to discontinue treatment and remain clinically well for periods of observation of 6–23 months following the completion of a finite course of treatment solely with disulfiram.” [4]

One patient did relapse at 6 months and was re-treated with disulfiram.

The results from another group of 30 patients who received disulfiram were described by Liegner during the 2019 International Lyme and Associated Diseases Society (ILADS) annual conference. “Results have been impressive, and disulfiram use, with careful supervision, has been relatively safe.”

“It will remain to be seen whether disulfiram has a role in acute or early Lyme disease or babesiosis,” Liegner adds.

Furthermore, “Any role for disulfiram in children, with their incompletely matured nervous systems, remains to be determined and should be approached with caution, as there is little experience with its use in children.”

None of Liegner’s three patients stopped treatment with disulfiram. One patient had a temporary psychiatric hospitalization, and a second stopped after a syncope event that led to a concussion that required hospitalization. And according to Liegner, the risk of adverse events was even lower in the study involving 30 patients.

Disulfiram’s side effects, when prescribed for other conditions, have included “encephalopathy, convulsion, cranial and peripheral neuropathy, toxic optic neuropathy, irreversible injury to the basal ganglia with permanent neurological deficits, hypertension, and drug-induced psychosis, presumably due to the inhibition of dopamine beta-hydroxylase,” writes Liegner.

Another study investigating disulfiram as one of the new treatments for Lyme disease and co-infections was launched in 2019 by Dr. Brian Fallon, from the Lyme and Tick-Borne Diseases Research Center at Columbia University.

A study by Stanford Medicine suggests that the antibiotic azlocillin “completely kills off the disease-causing bacteria Borrelia burgdorferi at the onset of the illness.” In addition, the authors say, azlocillin “could be effective for treating [Lyme disease] patients infected with drug-tolerant bacteria that may cause lingering symptoms.” [5]

Researchers tested azlocillin in mice infected with Lyme disease at 7-day, 14-day and 21-day intervals and found that it eliminated the infection. Additionally, in lab dishes, the azlocillin killed drug-tolerant forms of B. burgdorferi, “indicating that it may work as a therapy for lingering symptoms of Lyme disease,” according to the Stanford team.

Azlocillin has not yet been prescribed or studied in Lyme disease patients.

Azlocillin adverse events for other indications have included hypersensitivity reactions, hypocalaemia, hepatotoxicity, diarrhea, and leukopenia. [6] There are also costs and risks associated with the need to administer azlocillin intravenously.

Researchers from Johns Hopkins School of Public Health found that a combination of antibiotics – daptomycin, doxycycline, and ceftriaxone − eradicated the slow-growing variant form (persisters) of the Lyme bacteria in a mouse model. Scientists believe persisters may be responsible for the chronic symptoms that some Lyme disease patients experience.

“There is a lot of excitement in the field because we now have not only a plausible explanation but also a potential solution for patients who suffer from persistent Lyme disease symptoms despite standard single-antibiotic treatment,” says Ying Zhang, MD, Ph.D., senior author on the study. [7]

Zhang and his team hope to test the drug combination in people with persistent Lyme disease.

Daptomycin has not yet been prescribed to Lyme disease patients, and adverse effects, for other conditions, have included myopathy/rhabdomyolysis, eosinophilic pneumonia, and anaphylactic hypersensitivity reactions. [8]

There are also costs and risks associated with the need to administer daptomycin intravenously.

Editor’s note: I am encouraged by all the research seeking to identify new treatments for Lyme disease and remain hopeful that we will develop research designs to evaluate the value of these and other treatments for tick-borne diseases.

Will late-stage Lyme disease treatment include azlocillin?
Is prolonged treatment for Lyme disease the new norm?
Persister cells survive attacks by antibiotics and may contribute to chronic illness in Lyme disease patients

6 Replies to "New treatments for Lyme disease on the horizon?"