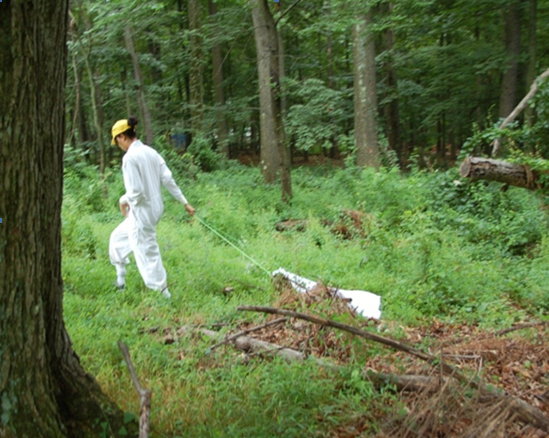 Researchers have identified adult blacklegged (Ixodes scapularis) ticks in the southern United States, specifically looking in Texas. Using the collection method of flagging and dragging, investigators found 656 adult ticks between October and April. But nymphal ticks were nowhere to be found.

In their article “Searching for the Immature Stages of Ixodes scapularis in Leaf Litter and Soil in Texas,” Tietjen and colleagues, from Texas A&M University, speculate that nymphal ticks in the south could be in the leaf litter or in different soil layers rather than on the understory vegetation. [1]

So, employing a different type of collection method, “samples of leaf litter, topsoil, and subsoil were placed within Berlese funnels to determine if the immature stages of I. scapularis are residing in these layers,” states Tietjen.

But no nymphal ticks were found in any of the 600 samples of leaf litter or soil, unlike what was seen in the Northeast.

Ticks have two categories of host-seeking behavior: Some live in their host’s nests or burrows, while others live in open environments and actively seek out hosts.

Nymphal ticks in the South may be using both behaviors, the authors suggest. They may drop off the leaf litter, quickly desiccating and dying in the southern heat. Or, the ticks might be attaching to lizards and then dropping off in their host’s nests and burrows.

If nymphal deer ticks are hiding in nests and burrows, it might explain the difference in the prevalence of Lyme disease between the northern and southern states. That is, because nymphal ticks would be “less likely to come into contact with humans resulting in less tick bites.”

The study confirms the existence of adult Ixodes scapularis ticks in the South, but does not address the risk to humans.

The risk of tick-borne diseases in the South has been discussed in several Lyme disease Science blogs:

Even more evidence of Lyme disease in the South

No Replies to "Southern nymphal deer ticks in hiding?"