Babesia remains a clinical diagnosis for some patients

A northwestern Indiana doctor warned the Indiana State Department of Health [ISDH] of a high prevalence of clinically diagnosed Lyme disease and Babesia among his patients. The physician said eight of his patients evaluated between 2015 and 2016 tested positive for Babesia microti (B. microti).

In turn, investigators from ISDH and the Centers for Disease Control and Prevention (CDC) examined specimens from 14 of the patients diagnosed with Lyme disease and B. microti.  They tested for Babesia infection by Giemsa-stained blood smears, PCR (polymerase chain reaction), and indirect fluorescent antibody (IFA) for total immunoglobulin to B. microti.

The only clinical manifestation consistent with Lyme disease included unspecified rashes in 3 patients. Anemia and fever, symptoms associated with Babesia, were identified in 2 patients.

As a result, investigators concluded that none of the patients “fulfill the national surveillance case definition for non–transfusion-associated babesiosis,” writes Brown from ISDH. [1]

Two of the 12 patients had a B. microti IFA titer of 1:64 but this is considered “insufficient evidence” by the CDC for a Babesia diagnosis. All other testing was negative. None of the patients who initially tested positive for B. microti serology were confirmed as positive.

The CDC and ISDH concluded that their “laboratory-based investigation does not suggest a cluster of Lyme disease or babesiosis cases among these patients.” 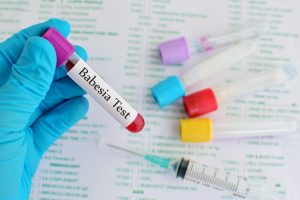 Indiana doctor warns state health department of a cluster of Babesia cases among his patients.

There are several possible reasons investigators could not find laboratory confirmation of B. microti.

First, they looked at lab results long after the onset of symptoms, when Giemsa-stained blood smears and PCR would typically be negative.

Treatment and a delay in testing may have altered the laboratory results.

Investigators did not fully examine the factors that led the doctor to make a clinical diagnosis of Babesia. “ISDH did not conduct patient interviews or chart reviews; demographic and clinical data were obtained from the CDC specimen submission form,” states Brown.

Doctors are advised to make a clinical diagnosis of Babesia, Brown concludes. “Lyme disease and babesiosis should be considered in the differential diagnosis for patients with clinically compatible illness and potential exposure to I. scapularis ticks in areas where the pathogens are present.”

No Replies to "Babesia remains a clinical diagnosis for some patients"