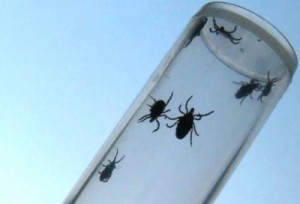 The blacklegged tick (Ixodes Scapularis), otherwise known as the deer tick, has been expanding throughout Canada. The tick, which harbors Borrelia burgdorferi sensu stricto, the bacteria causing Lyme disease, is finding its way into new regions, thanks to climate change, according to Lieske and colleagues from Mount Allison University in New Brunswick, Canada. [1] Furthermore, milder winters and a rise in annual precipitation are contributing to the increase in the number of black-legged ticks.

Ticks were collected by veterinary clinics and the general public between 2014 and 2016 and sent to the university as part of a surveillance program. In evaluating the data, the authors identified “hot spots” in northern New Brunswick where I. scapularis ticks had been found on dogs.

“Canine infections were generally concentrated in the south-central portion of the province,” Lieske states. “However, Borrelia seropositive dogs were also recorded in a number of pockets in northern New Brunswick, in 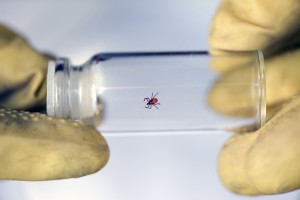 areas where environmental conditions are not expected to favor tick occurrence.”

So, how did the ticks wind up in an unsuitable environment? Birds. “Long range dispersal, via avian hosts, remains the most persuasive explanation for the presence of ticks and tick-borne infections outside of the optimal (largely temperature-limited) environmental envelope,” Lieske writes.

Several studies, Lieske points out, have shown that ticks can be dispersed by migrating birds. “Adventitious ticks are able to leapfrog beyond established portions of their range.”

The prevalence of ticks in northern regions of Canada may be underestimated. A recent paper by Lewis and colleagues shows that the rate of detection of I. scapularis ticks was significantly higher for citizen scientists than for professionals. [2]

It would be reasonable for the public to be aware of the growing threat of ticks in northern Canada.

Back yards at risk of migrating deer ticks

No Replies to "“Hot spots” for blacklegged ticks found in Canada"