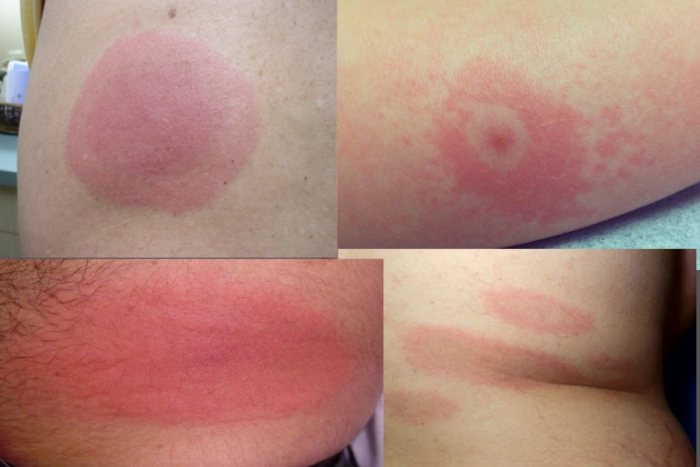 Many people assume that a Bull’s-eye or erythema migrans (EM) rash is a common manifestation of Lyme disease. And that the lack of a rash confirms a person does not have the disease. This is far from the truth. The EM rash can be absent in at least 50% of Lyme disease cases. In fact, a LymeDisease.org survey of 3,000 patients with chronic Lyme disease found that only 40% reported a rash of any kind. Additionally, if present, an EM rash does not always appear as a classic target lesion with a central clearing, according to new study findings. [1]

If patients are expecting a Lyme disease rash to look like the typical Bull’s-eye lesion they may miss receiving an accurate diagnosis. “The assumption that all EM [rashes] look like the classic target lesion” can lead to diagnostic errors, warns Burlina and colleagues in their article “AI-based detection of erythema migrans and disambiguation against other skin lesions.”¹

EM rash identification remains a challenge because it often takes on a variety of appearances, Burlina points out.

READ MORE: How the incidence of an EM rash can be inflated

The authors found “only 20% of patients with an EM [rash] in the United States present with lesions that have the central clearing of a classic target lesion (“ring-within-a-ring” or “bull’s eye”).

Instead, “the majority of EM lesions appear uniformly red or bluish-red in color and lack central clearing.”

Unfortunately, a Lyme disease rash may look like lesions found in other disorders. For instance, patients may be misdiagnosed as having a cellulitis rash. The treatment for which is not necessarily effective for Lyme disease.

Furthermore, between 4% and 8% of Lyme disease rashes present with a central blistering. These cases can be misdiagnosed as shingles, a viral infection that causes blistering and is treated with anti-viral medications. Shingles treatment is not effective in treating Lyme disease.

Lastly, about 20% of patients have multiple EM rashes at the time of diagnosis due to the Lyme spirochete disseminating to other areas of the body. This presentation can be confused with erythema multiforme or other skin disorders.

Not all EM rashes that signify Lyme disease have a circular, Bull's-eye appearance. Many have unique presentations. Click To Tweet

“Accurate identification of erythema migrans allows for early diagnosis and treatment,” the authors write, “which avoids the potential for later neurologic, rheumatologic, and cardiac complications of Lyme disease.”

The “complexity of the presentations” for both single and multiple EM rashes is underestimated by patients and clinicians, the authors write. A survey found that 73% of individuals correctly identified the classic Bull’s-eye rash. But non-classic lesions were identified only 30% of the time.

To assess the accuracy of diagnosing a Lyme rash, Burlina et al. asked clinicians to review photos of rashes from the Johns Hopkins University and Lyme Disease Biobank. (The rashes were confirmed using clinical information at the time of diagnosis.) Could they identify what a Lyme disease rash looked like?

8 types of rashes that look Lyme disease rash look like were included in the assessment:


Clinicians asked, “What does a Lyme disease rash look like?”

Nearly 3 out of 4 investigators (71.58%) were able to identify the Lyme disease rash (EM) when presented with 8 types of rash photos.

When asked on a “Yes” or “No” basis whether a rash was due to Lyme disease or another condition, the investigators did much better with 94.23% correctly recognizing the EM rash.

The authors were not able to evaluate the ability of doctors in recognizing a Lyme disease rash among other patient populations. “Our dataset did not include a significant number of individuals with dark skin.”

The study did not look at whether the clinical history might improve the accuracy of the diagnosis. Additionally, the probability of recognizing a Lyme disease rash might improve if the patient has a history of recent exposure to ticks, a tick bite, or symptoms.

The accuracy in identifying what a Lyme disease rash looks like might drop if the patients did not live in an endemic area or if the patient had a confirmation bias. Confirmation bias involves selective gathering of and neglect of contradictory evidence, writes Satya-Murti and colleagues.²

Editor’s note: In practice, I treat with an antibiotic if there is uncertainty, as the consequences of missing a diagnosis of Lyme disease can be serious. If the rash is questionable, I often treat with antibiotics that would treat both cellulitis and Lyme disease, such as cefuroxime rather than Keflex. I have also treated patients with a combination of an anti-viral medication (Valtrex) and cefuroxime if I am unsure whether the rash is related to shingles or Lyme disease.

Signs and symptoms of Lyme disease

2 Replies to "What does a Lyme disease rash look like?"