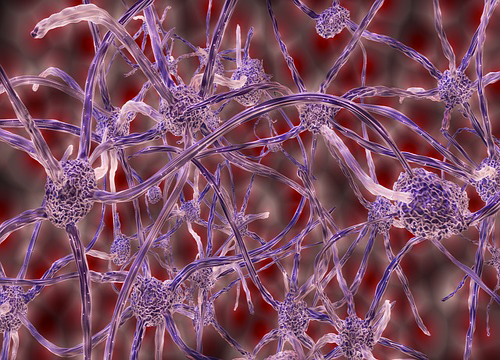 A new study published in PLoS ONE by Novak and colleagues suggests that small fiber neuropathy (SFN) may be a viable biomarker of post-treatment Lyme disease syndrome (PTLDS), particularly for patients whose main symptoms involve sensory issues.

The retrospective study included 10 patients diagnosed with post-treatment Lyme disease syndrome, who had autonomic testing performed between 2016 and 2018 at the Brigham and Women’s Faulkner Hospital Autonomic laboratory. [1]

The authors aimed to identify SFN as a possible biomarker of “PTLDS,” in addition to evaluating autonomic dysfunction associated with presumed small fiber neuropathy and assessing cerebral blood flow, since cognitive complaints may be due to cerebral hypoperfusion.

Novak and colleagues defined “PTLDS” using the Aucott’s criteria, which states that patients must have: 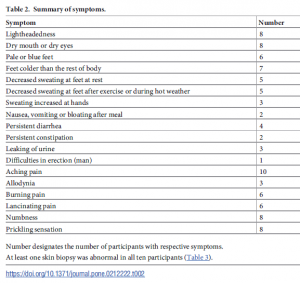 Symptoms reported by study participants. (Click on image to enlarge.)

They found that more than 50% (7 out of 10) of patients had a low cerebral blood flow velocity (CBFv) from their middle cerebral artery. This was determined using a Transcranial Doppler. The study was not designed to determine if the low CBFv contributed to the cognitive impairment in those 7 patients.

All of the patients had a loss of small fibers, along with autonomic dysfunction and abnormal cerebral blood flow.

Sensory symptoms and pain reported by some patients with ongoing Lyme disease symptoms may be caused by small fiber neuropathy and a low cerebral blood volume, according to the authors of a new study. Click To Tweet

According to Novak, the sensory symptoms and pain reported by their patients may have been caused by small fiber neuropathy and low cerebral blood volume. “SFN appears to be associated with ‘PTLDS’ and may be responsible for certain sensory symptoms,” the authors write. “Dysautonomia related to SFN and abnormal CBFv also seem to be linked to ‘PTLDS’.”

Therefore, “Our study indicates that SFN may be an objective marker of ‘PTLDS’, at least in patients with prominent sensory symptoms,” Novak writes.

The study was not designed to address treatment. The authors assumed the patients did not have a persistent infection.

Editor’s note: I have been reluctant to use the term “PTLDS” until there is a reliable test to rule out a persistent infection.

Can we measure the brain’s exaggerated response to pain and sensory input?

Is your fibromyalgia patient a candidate for Lyme disease treatment?